Machinehead gig at the Brixton Academy

Last week I made the trip to the O2 Academy at Brixton with @dobbytastic to see the awesome Machinehead. It was my first time to the Brixton Academy and I’d heard it was a nice intimate venue so was really looking forward to it. Last time I saw Machinehead the were supporting Metallica at the new Wembley stadium, thier sound was a little naff and they were dots on the horizon, so I was looking forward to ‘looking them in the eye’!!

I found a fantastic web site: http://www.parkatmyhouse.co.uk/ which meant we could park cheaply 5 minutes walk form the venue. This was just as well as some sort of biblical monsoon opened up on our arrival causing us to sprint to MacDonalds before nipping off to find Rich and Steve who we were meeting up with.

We ran into them at a nearby pub, at which a band were setting up and soundchecking. Despite my best efforts I’ve not been able to find out who the were, but they are best described as an japanese, overly distorted ‘At the drive in’, with mickey mouse on helium singing. I felt a bit sorry for them as the pub was rammed with Machinehead fans and when they finished their soundcheck there was a stunned silence, you could have heard a pin drop!!

So, off to the gig and there were three support bands promised. Unfortunately we missed the first whilst listening to the ‘helium brothers’. Next up was ‘Bleeding Through’, I’ve not heard of these guys before. I suspect it could have been quite good, there were certainly quite a few people there who seemed to know the songs, but the sound was terrible. Just a wall of noise really with very little discernable differences between the instruments at all. A great shame.

Next up were ‘Hatebreed’, I have a couple of their albums so I was looking forward to hearing them live for the first time. They were really good and got the place rocking big time. It was really all starting to kick off.

Then came the mighty Machinehead. We’d been looking forward to this for a long time and they really didn’t disappoint at all. The whole place went completely mental and I got swept away into a massive mosh pit! It was fun getting into the swing of it all and eventually I washed up somewhere towards the back in the middle with a good view!

I’ve only really been a fan since the awesome ‘Blackening’ album so it was good to hear some earlier stuff too. Here’s a set list of what they played…… 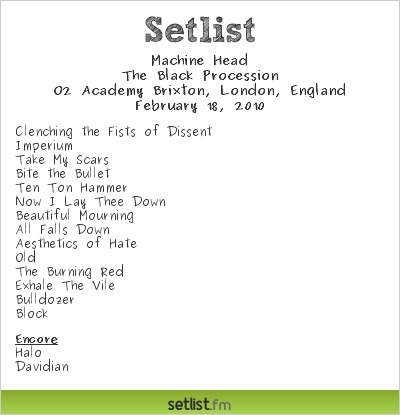 So we got out at nearly midnight, a great gig, totally deaf afterwards!

I love cake, me, in fact there's nothing I don't like about the stuff. It's delicious, moist and scrummy.
View all posts by cakeaholic68 →
This entry was posted in Uncategorized and tagged Flickr, Guitar, jimbo, live music, machinehead, Music, o2 brixton academy. Bookmark the permalink.